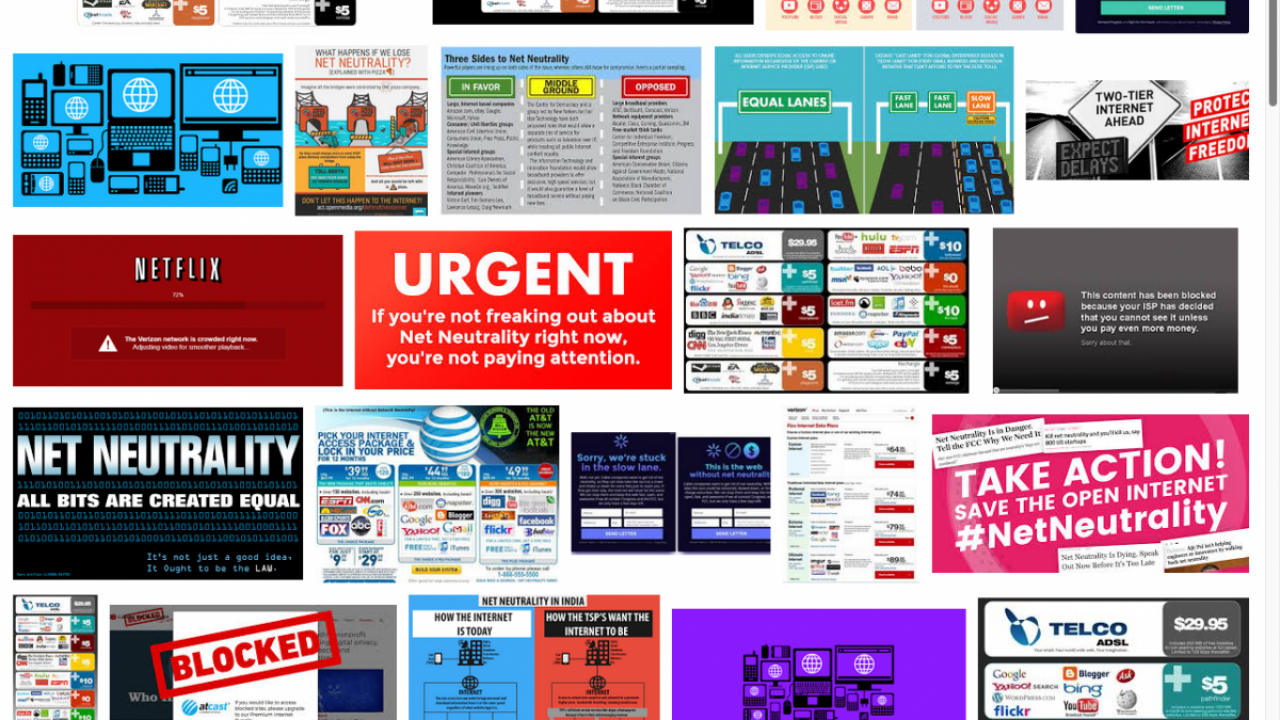 To encourage scholarship and innovation, speak up for net neutrality

From Information and Educational Technology

In her position, she is most directly concerned about the injury this change would inflict on scholarly journals and communication, and by extension the damage that would then flow out to the research and innovation that communication supports. But online education, startup companies, and other endeavors would all be harmed.

Today, traffic is treated equally as it moves across the internet. That’s the core of net neutrality. You cannot legally pay an internet service provider (ISP) to move your data faster than anyone else’s.

However, major telecom companies and broadband internet service providers would like to abandon the concept so they could create a “fast lane” on the internet and charge a higher price to access it. As the BBC summarized last year, “Internet service providers have called for the ability to provide what would essentially be an internet fast lane for major, data-intensive services like Netflix. The ISPs would seek to charge the companies to be on this fast lane, a move described by most in the technology community as extremely anti-competitive and against the spirit of the internet itself.”

Journals, schools, many universities, nonprofits, and other content providers that can’t afford the toll charge for faster transit would see the flow of their information slowed, in relative if not absolute terms. Their work would take a back seat to traffic with higher commercial value.

When you visit a website where the article or resource you want waits to load while the paid content surfaces, you have a rough idea of what could happen on the internet itself.

A threat to real-time collaboration

Without net neutrality, the experience of using the scholarly journals that concern Smith would be degraded. They would be slower to load and respond. People would likely turn away from them, says Peter Brantley, director of online strategy for the UC Davis Library.

How much degradation? We can’t know unless it happens, but we do know that delays of just fractions of a second inhibit online engagement. In 2012, Google calculated that it could lose 8 million searches per day if its search results were slowed by just four-tenths of a second. The longer a website or resource takes to appear, the less likely people are to see it. They look for faster options.

Nor are we talking only about publications. The library engages a wide range of resources on behalf of faculty and students—databases, journals, and different repositories.

“Universities depend on very niche content,” Smith says. “The library’s job is to make sure that the faculty and students have access to the resources they need to do their research and teaching, and here at Davis, that spans every subject, every discipline. They range from very popular, big subjects, like psychology, to tiny niche ones, like a sub-specialty of neuroscience. The publishers range from big conglomerates, with thousands of journals, to a society that has two. That is their sole source of income and the only reason they still exist, but they’re serving a lot of faculty here.

“We argue for things like net neutrality to keep the playing field level as much as possible,” she says, “so that little niche disciplines can get the same access as big, popular topics.”

A March 30th letter to the Federal Communications Commission (FCC), co-signed by the Association of Research Libraries and other leading groups in higher education, elaborates on the likely fallout.

Repeal of net neutrality “would most threaten the high bandwidth applications and services that enable real-time collaboration, content creation, sharing, and learning by education and other community institutions, including libraries. By and large, such institutions cannot afford to pay for prioritized access. Those who can, like entertainment providers, will have their uses of the internet prioritized ahead of education, access to information, and other public interests, with significant, negative consequences.

“For example, if students and library patrons cannot use online educational resources effectively, which would likely result if commercial content is prioritized ahead of non-commercial uses, they may abandon those resources, regardless of the ultimate impact on their learning.”

“Net neutrality has allowed educators to disseminate learning at low or no cost to a worldwide audience,” adds Paul M. McNeil, dean of UC Davis Extension. “Any effort that limits providers and knowledge seekers to those who can pay the most is a serious blow to intellectual freedom and the quality of life of the global population.”

California is home to countless startups that have used the internet to innovate. Let’s hear from one of the innovators.

Mac Clemmens is a California entrepreneur. He created and runs Digital Development, a multimillion-dollar Sacramento web development company; earned an MBA from the University of California, Davis, Graduate School of Management in 2007; has been identified as a rising star in business in the Sacramento region; and has been to White House events three times to talk about net neutrality.

Abandoning net neutrality—a better term for this change would be “net commercialization,” he says— “basically favors the incumbents. They’re the ones who can pay the cost. Net neutrality favors the entrants by giving them an equal shot. The principle of net neutrality lines up with research and innovation.”

Google, which itself started as a search engine operating on servers at Stanford University 20 years ago, endorses net neutrality.

“The internet should be competitive and open,” says the company’s “Take Action” campaign. “That’s how it works today and how it has always worked. It’s a level playing field, where new entrants and established players can reach users on an equal footing. If internet access providers can block some services and cut special deals that prioritize some companies’ content over others, that would threaten the innovation that makes the internet awesome.”

Surely there are more innovations to come—from individuals, companies, universities, labs, private-public collaborations, more. The equitable flow of traffic across the internet helps them all, Brantley says. The internet is the platform for increasing connections and interactivity.

Consider, he says, the importance of “disciplines or emerging areas of science or inquiry that don’t have an established foothold, and so are emerging as niche journals, or small pockets of work that are being done in academic labs, or private labs, or small companies. Obviously, as we enter a much more networked environment for innovation, there’s not always going to be a Xerox Labs, or a Rand, or Bell Labs, that’s going to be the source of private-sector innovation.

“As the number of partnerships increases between academia and higher education and the private sector, those partnerships are vital to defining the next generation of knowledge,” he says. “Our ability to leverage those associations, those relationships, depends on being able to share information across the internet.”

“This is a very important point,” Smith says. “Part of the library’s role is to amplify our impact by getting the faculty’s research out there. They publish through formal journals, but they do other forms of communication too, that the university supports directly. We are going to need access to the good network to share that research.”

To uphold net neutrality, in 2015 the FCC decided that broadband internet service is a utility that can be regulated. As the Washington Post reports, “the regulation is hotly contested by critics who argue that internet service providers (ISPs), such as Verizon and AT&T, don’t need preemptive government rules and should be free to find new ways to make money.”

The critics of net neutrality include Ajit Pai, an FCC commissioner who became FCC chairman in January 2017. In February, speaking at the Mobile World Congress in Spain, he “claim[ed] that net neutrality… has driven investment in U.S. broadband to historically low levels,” reports Consumerist. “However, the actual numbers given by the nation’s largest cable and telecom companies [since the FCC ruling in 2015] don’t appear to back this up.”

Regulating a key channel of information in the interest of equal access is nothing new, Clemmens points out.

“The regulation doesn’t have to be heavy,” he adds.

One might hope that competition could help—that if one major broadband provider charged too high a price, a rival could undercut them.

“That assumes you don’t have a monopoly. We just don’t have competition. Consolidation has occurred to where we have an oligopoly,” Clemmens says. “We don’t have free choice, and in many areas, we don’t have any choice. There is no real competition. We cannot rely on that.”

The library has already seen journal publishers close or consolidate because of the costs of competing in an increasingly networked world, where students, faculty and other users expect fast, rich, and interactive web resources. Ending net neutrality would accelerate the trend toward consolidation, Smith says, causing more journal publishers to either merge with large publishers and lose control over their work, or go out of business altogether.

One more thought about speed. Digital Development builds sites for nonprofits. One is WEAVE, or Women Escaping a Violent Environment, in Sacramento. The site’s front page includes an “exit site” button which, when clicked, instantly replaces the site with another page. The exit is there in case the user needs to quickly leave the site, perhaps to hide her interest in WEAVE from a potential abuser.

“That’s not something we want to wait a second or two to load,” Clemmens says.

Higher education associations should continue to promote net neutrality. “Be vocal,” Brantley says. “We need to be assured that we can provide content from anywhere on the network to our students and faculty, under a neutral environment, and that our faculty and researchers can engage similarly with external actors. Also, that if they need to work with a smaller research organization, there’s no cost or penalty to that effort.”

Persistent engagement is needed. Even if the principle of net neutrality is preserved, it could be weakened by tactics like “zero rating,” which mobile broadband providers use “to allow content-streaming from certain sources without it counting against a user’s data plan.”

If we believe discovery often starts with small ideas that can make important contributions to knowledge, culture, and innovation, then we need to protect effective access to those ideas as they flow across the internet. We need to protect net neutrality.

“Information is a public good,” Clemmens says. “It needs some defending.”